I first set foot in Japan just over 2 years ago, and ever since then I’ve made it a life goal to visit that awesome country at least once a year for the rest of my functional life (same as Queenie!).

So when Micah and I heard that Mcdonalds Philippines would be introducing some Japanese offerings for a limited time, we scheduled a visit at the soonest.

We tried the 4 available items on the menu:

A regular cheeseburger patty, with the usual toppings replaced by teriyaki sauce, mayo, and lettuce.

The sauce was a bit too sweet and lacked the peppery-ness of a good teriyaki sauce, the mayo was pedestrian, and the lettuce didn’t bring the crunch it was supposed to due to being drenched in the sauce.

Verdict: Pricey for what it is, considering the other options in the market. 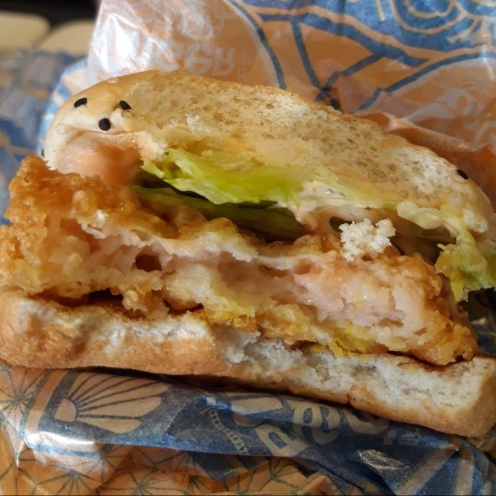 At first glance, it is already evident that the ebi patty is so much more compact and filled with shrimp you can actually see in Japan’s version. The star of the show forgot to make an appearance in Mcdo PH’s version, as there were only around 4 to 5 pieces of shrimp in the whole patty.

Definitely our favorite among all the Flavors of Japan. The flavored powder was enough to coat all the fries generously, and the umami flavor was really allowed to shine through due to the controlled salt level of Mcdo PH’s fries.

Verdict: Something worth coming back for, sometimes even a better choice than Potato Corner. Should go great with an ice cold beer.

Imagine drinking Sprite, only with a couple of drops of a strawberry and cherry syrup, topped with a scoop of vanilla ice cream (which was a pain to incorporate due to all the ice!).

Sounds like a cup of this can induce diabetes, yes? Insanely sweet, even for a sweet-tooth like me.

Verdict: A beverage that lacked balance and didn’t partner well with any of the food.

Overall, the food was mostly a disappointment. It felt like a lot of corners were cut to cut down on cost and make the burgers accessible to the Filipino people. For example, the Japanese Ebi Burger costs about twice (around JPY600 a la carte or Php300), which isn’t a price most of Mcdo PH’s patrons would be willing to shell out.

But hey, at least we got something new to try, yes?

If you had a different experience than we did with these Flavors of Japan, feel free to share in the comments section below! 🙂